The Monastery of Galataki which is dedicated to Saint Nikolao holds the belief of the God Poseidon within its grounds.

The monastery itself is situated 200 meters above the sea on the face of a cliff overlooking the Evian Straits. In its original forma and up until 1946 it was run by Priests of the Highest Order and since then has now been given over to the Nuns.

The Monastery holds spiritual treasures, icons, paintings, books depicting legends of the area which are kept in the inner library. It is a must for all travelers to pay at least one visit to this wonderful and archaic Monastery.

Please note that the last 1-2 kms of the road leading to the monastery is an unfinished dirt road. 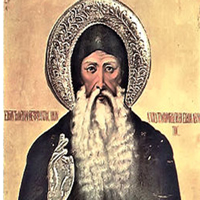 Osios David is found high upon a mountain top between Kalamoudi and Drymona and entrance is forbidden wearing shorts, short sleeves on shirts, or women wearing trousers. Upon entering, you will be examined by the high priest and his door keeper to see if you are appropriately dressed to enter the temple. There are shirts and elastic waist skirts provided for those who need further coverage.

Osios David is a monastery built on the grounds where a very ancient church once lay. The monastery is a mere 500 years old although even within that time is has had to be re-built due to being burn tdown during the Revolution. The church was built around 1550 and is a strong place of worship for the Greek Orthodox community with thousands of visitors from all over Europe and the rest of the world every year.

Most visitors attend the spectacular celebrations on August 6th of the Metamorphosis of Sotiros and the memorial on November 1st of Osios David.

There is a nearby spring that legend says the young David touched the rock on the mountainside and the spring was born. It still flows today and many people believe in its healing properties. It is found at the first turn on the road after the monastery. 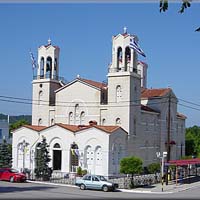 Osios Ioannis Roussos (Saint John the Russian) – This church was built by Hellenic refugees from Kapadokias in Asia Minnor who brought his holy body which is now lying enclosed in glass casing for visitors to worship. The Church was being build from 1930 until 1951.

Thousands of pilgrims make the mountain walk from Chalkida to this spectacular church every year, in particular on May 27th, where some 200,000 visitors come to celebrate St. John the Russian –also known as the protector of travelers.

In 1851 Eleni Manaritsa has a vision of a church buried under the ground at a certain plateau.

A first excavation in 1856 revealed an early Christian church built during the reign of the Byzantine emperor Justinian. It was built on top of former Roman Baths of which the mosaic floor is saved which depicts swimming fish (part of which you can see at the museum of Limni.

It is dated at around 70 AD as similar one has been found in Roman baths in Rome. Various archeological finds have been unearthed, the most significant being a statue of Hercules. 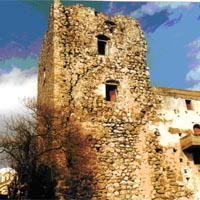 Stuck among newer buildings, the Tower of Rovies remains standing despite the fact that a fig tree tries to do what many conquerors tried and failed. To demolish it.

It was built in 1256 by Villeherdouin the Venetian ruler of Achaia (in Peloponnese). If you look close enough at the lowest parts of the building, you will see that the stones in the foundations are not sculptured, but rough as they were brought up form the river. Was the tower perhaps built in a rush?

It is said that from its roof bright signals were sent across the water which were then transmitted all the way to Italy carrying messages.

It has survived earthquakes, attacks and the devastating obsession of Mohamed B’ who destroyed every fortress in Evia.

During the Turkish occupation the Aga brought his harem here for the summer holidays.

In 1930, when concrete was a new material, Antonis Papadopoulos reinforced the structure which, however, changed the appearance of the Tower. This was done after an accident when the small wooden balcony, built of cement now, fell to the ground killing an old woman who was sitting on it. 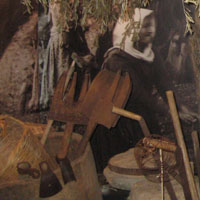 In the village Agios there is a jewel of a museum filled with articles of every day life in the area going back many years. Until now 80 families from Agios and other surrounding villages have donated agricultural tools, furniture and kitchen utensils, decorative articles, linen, various coins, pictures, old original documents etc.

Distributed on three levels they are all presented in an excellent way with background enlarged pictures, which expand the space, special lighting, original placing, theatrical approach. A delight indeed. 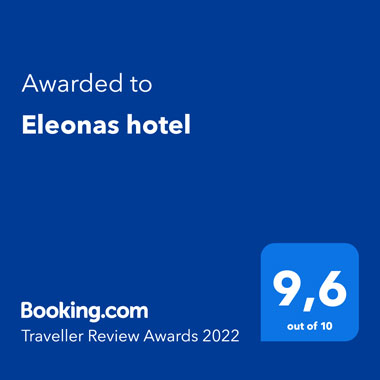 We are pleased to announce the publication of the new Petit Futé ILES GRECQUES’s edition.
Eleonas hotel has been selected by the team of editors and appears in the top location in this edition.
This

Fabulous hotel, the view is beautiful, the room is spotless clean, and the breakfast, homemade is so delicious ! The owner is lovely, helpful and so gentle. We had a wonderful time.- CATHERINE France Aug2020